This email address is being protected from spambots. You need JavaScript enabled to view it.

A sponsorship opportunity exists for your company for the prestigious 2022 North meet South event to be hosted at Gariep Dam. Please send us an e-mail showng interest in this opportunity.

Posted in The Law

The SAGPA team is in the process of engaging with CAA on the renewal of the SAGPA Part 149 ARO. Once this Audit & Approval process has been successfully completed and the new ARO certificate issued and received back from CAA, will it be updated to the website.

Whilst the SAGPA team is getting the SAGPA ARO status back to current, the MISASA & SAGPA Exco considered several options, and ultimately the proposal to implement a Memorandum of Agreement between the two organizations was accepted. This agreement came into effect on 1st March 2022. Simply stated, ALL paid-up members of SAGPA remain members of SAGPA but with the only difference, be able to legally operate under the valid MISASA ARO and its MOP. Chairman Weidie Vorster & Vice Chairman George Coetzee have been co-opted onto the MISASA Management Team to manage the Gyro Portfolio. The SAGPA Committee is still to perform their normal day-to-day duties in terms of their elected positions and constitution.

It is to be noted by all members of SAGPA that during this transitional period, SAGPA members are to comply with the terms of the MISASA ARO MOP and request that you avail yourself of the content of the MISASA ARO 007 MOP ... More information will be sent out to PAID-UP members via Mailchimp in due course. 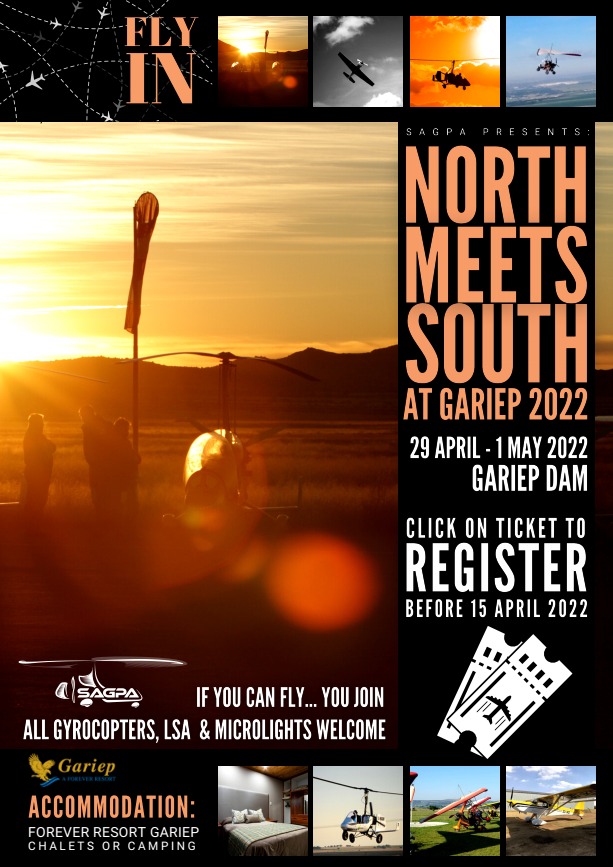 Just north of the town of Gariep, in the middle of a wide grassy valley, lies one of the best small airfields in the country. Once handling busy traffic during the construction of the dam, Gariep Dam Airfield has two long and wide tarmac runways, taxiways and an apron. With a game reserve on one boundary and the dam only a few kilometres to the east, wild life is plentiful nearby. A high ridge several kilometres away to the north forms a long silhouette and shelter against the northerly winds. To the west, the tree-lined Orange River slowly winds its way and long journey to the Atlantic.

You can use this interactive MAP to locate Gyro Plane dealers, schools, instructors & service centres.

Want to appear on this map?

Please send us an email with all your details to This email address is being protected from spambots. You need JavaScript enabled to view it. & we will add you.